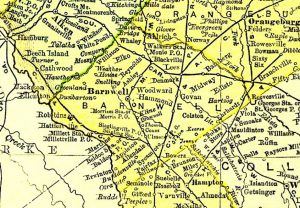 Barnwell County was called Winton County in 1785. The County was then named for John Barnwell, a Revolutionary War figure in 1800, the same year Barnwell died.

Barnwell County grew with the introduction of the SC railroad. The railroad linked Charleston with the old town of Hamburg on the Savannah River. Because of the railroad, the Barnwell County towns of Williston and Blackville grew up alongside the railroad tracks in the mid-1800s. Although trains no longer run through these towns, the railroad is still apparent.

Barnwell County is comprised of 548 square miles of land with an approximate population of 23,404 according to a 2004 U.S. Census estimate.

The City of Barnwell was known as "Red Hill" or the "Village" in its earlier days.

People began to settle in Barnwell by 1800, but it was not incorporated as a town until 1829. At that time, Barnwell's city limits encompassed a three-quarter-mile radius around the county courthouse. The Circle, in front of the courthouse, is still the downtown heart of the city.

Barnwell has a population of 5,035. Barnwell is now the County seat of Barnwell County.

The town of Williston started before the railroad. Descendants of Robert Willis, an earlier settler, gave the settlement his name. However, Williston didn't really grow until 1833, with the coming of the railroad. By then, a 136-mile stretch of the railroad had been lain to connect Charleston and the former town of Hamburg, near present-day Augusta. In 1833, this was the longest single stretch of railroad in the world.

During the Civil War, detachments of Union soldiers and cavalry defeated Confederate forces near Williston in February of 1865. The Union forces then tore up railroad tracks and burned many of Williston's homes. The historic Ashley-Willis house was spared because the Union soldiers slept there.

Before Blackville was settled as a town, people, both Native Americans, and settlers, passed through here as the Cherokee Trail and the Edisto River cut through the area.

In 1944, L.P. Boylston made a legal footnote when he deeded the one acre of land the spring is located on to "God."

Like other towns in Barnwell County, Blackville grew up around the railroad. The Blackville public library is stationed in the town's old train depot on Solomon Blatt Avenue.

For a time in the 1870s, Blackville was the county seat of Barnwell County. Blackville has a population of around 2,973 people.